This terrific series will be coming to an end next month, as planned. If you’ve been reading Infidel, you know the entire series has largely been about prejudice and jumping to conclusions. Fittingly, then, it makes a lot of sense its penultimate issue would feature the most conclusion jumping of all. 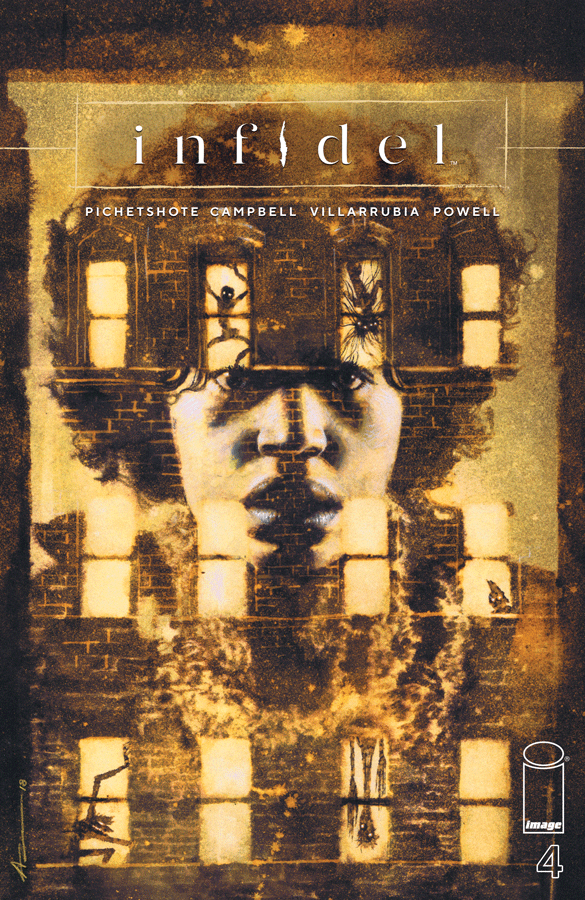 I love this cover. 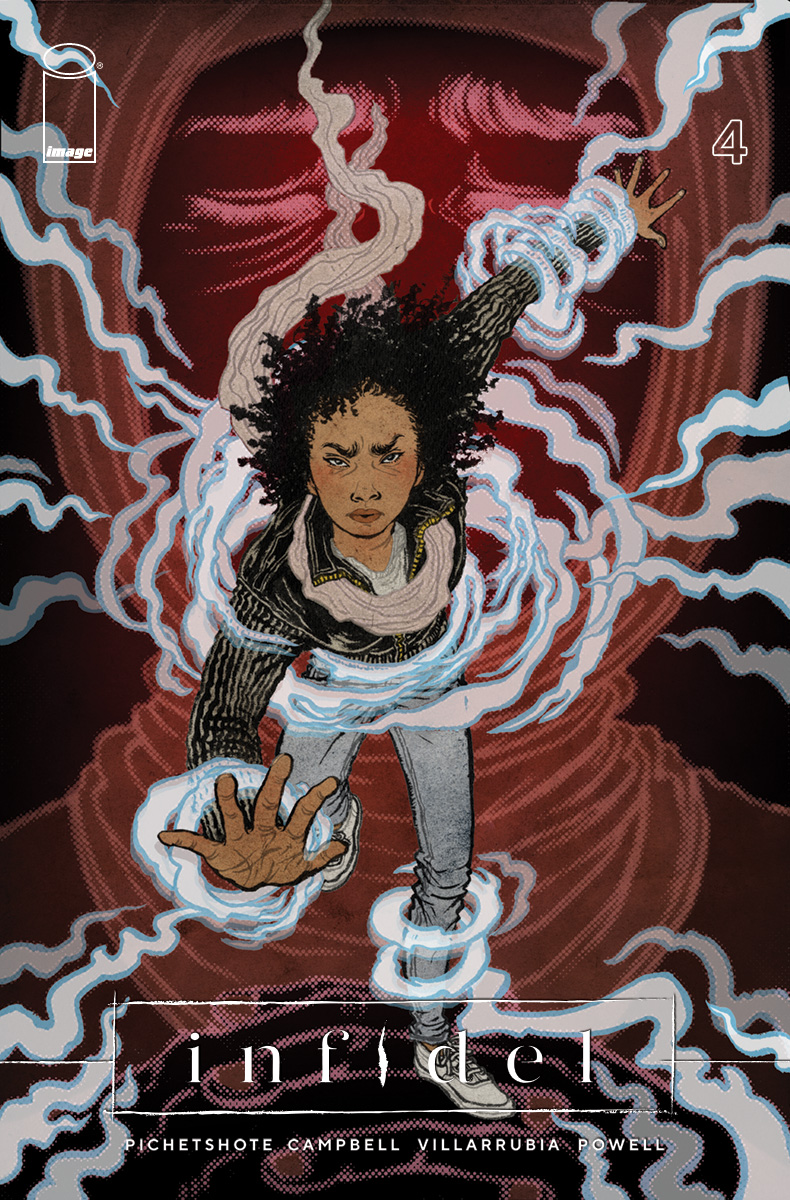 It’s hard to be subtle with social commentary. The reason for that is clear: you want social commentary to be loud, so people are sure to hear it. It doesn’t do much good, if the message you’re trying to convey goes unnoticed. To that end, Infidel has been very upfront with what it wants to say. Basically, don’t judge a book by its cover: whether it’s a Muslim woman, your own mother, your friends, or some bearded guy covered in tattoos and living in a scary house.

The great thing about this issue, however, is that it subverts that message, even if it does so reluctantly. For three issues, we’ve seen these entities manifest to more and more people. First, it was Aisha. She was attacked by these things, and now she’s in the hospital with her future stepdaughter Kris and her once-future mother-in-law is dead. Then there was sporadic sightings by Aisha’s friend Medina and her roommate Ethan. I missed the obvious connection between these characters, and I feel like that was the point. 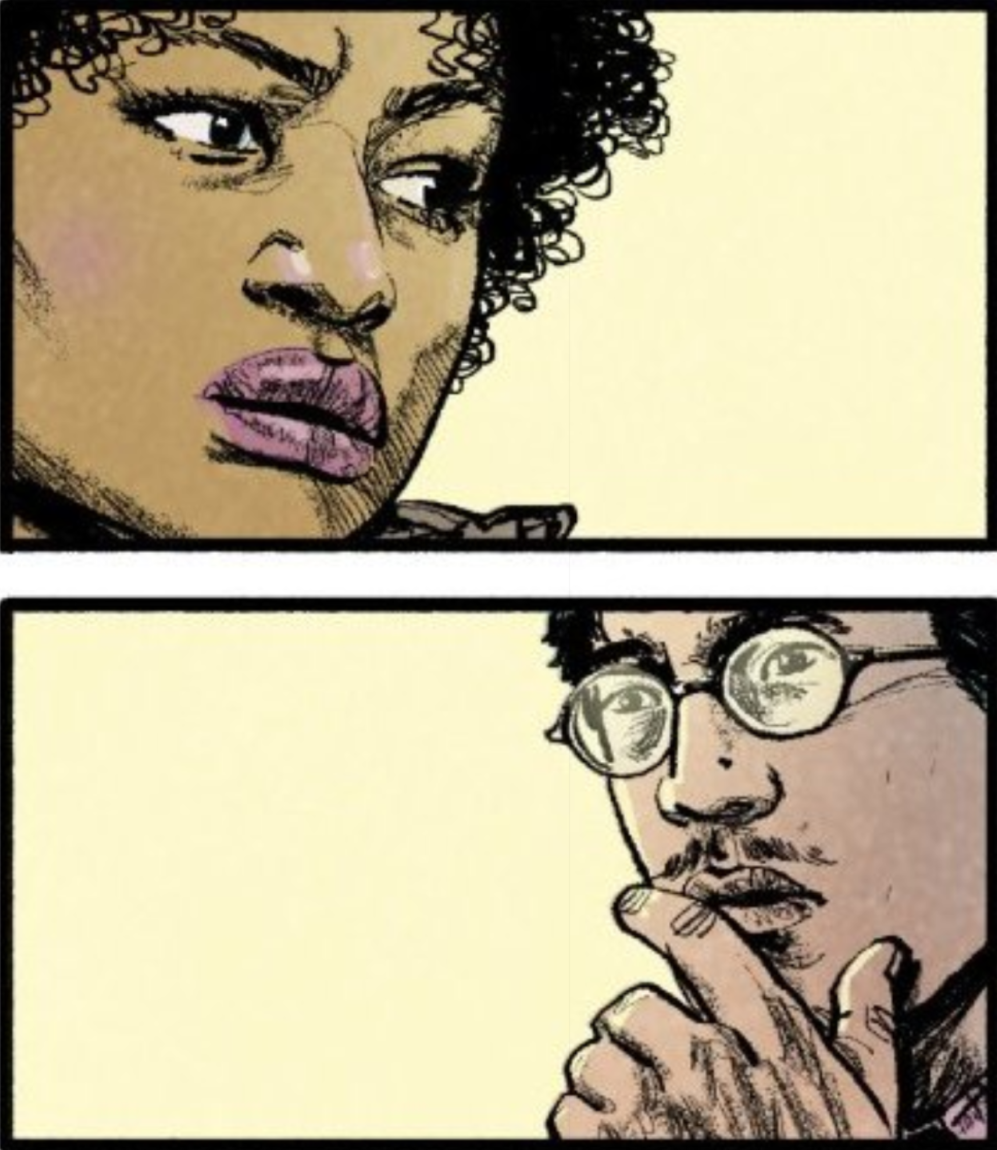 All these characters are people of color. This is a bit of a spoiler, but it’s important to note: this is explicitly recognized by Medina in this issue. Reynolds, another of their friends, is white and has failed to see the entities multiple times. Medina implies it’s because he’s white, and Ethan flatly says so when questioning her reasoning. I love this because it’s fucking honest, as is evidenced by the fact I-a white guy-missed it until it was spelled out for me.

To be clear, Infidel is not suggesting it’s okay to be prejudiced against white people; quite the opposite, actually. Leslie, the now-deceased future mother-in-law, was a white woman, and the series went out of its way to have Aisha not be prejudiced against her, even when it may have been warranted. What’s more, this issue features a white guy named Kent who is assumed a threat when he’s actually a nice person. That’s the great thing about this series: it doesn’t treat its characters as monoliths or tokens.

People may share characteristics, but we are all different. That’s only a bad thing if you fear that which is different from you. Unfortunately, a lot of people do, so we draw these arbitrary lines in the sand and then act as if it matters which side we’re on, but I digress. 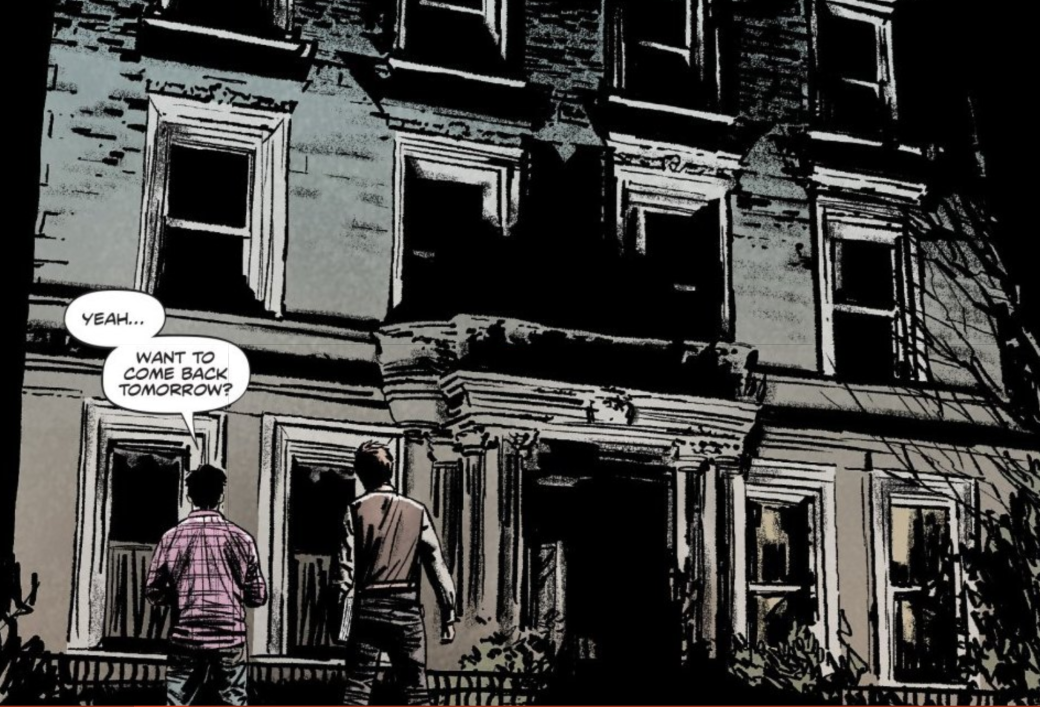 However, the simple fact is, if you are white-or what is considered white-it can be very easy to overlook things that are so obvious to people of color. When you’re not the one being attacked, when you’re not the one being selected for “random” screenings, when you’re not the one having your children taken away from you, it can be easy to miss the significance. This is especially the case when you live in a system designed to tell you there is no significance; that you should miss it because it’s not actually there. There’s no bias leading to the deaths of black people at the hands of police, so you shouldn’t say “black lives matter”. In fact, there is no racial inequality, so you should not kneel during the national anthem. Immigrants coming from Mexico are “animals” who want to “infest” America, so you should not care their children are being taken away from them. Islam is a “violent” religion, so it’s okay for Muslims to be summarily banned from entering the country.

Whiteness is a book cover so strong, you can could go your whole life without having to recognize you were born on the top shelf. This fact is acknowledged in Infidel. So, no, it’s not saying anyone should be prejudiced against white people; just that everyone should know what that cover means for a book.

Anyway, so the plot in this issue sets up one hell of a finale next month. I love how easily the story shifted from Aisha to Medina. It was such a smooth transition that it almost feels like nothing happened. Aisha went into the hospital, and then suddenly we’re following Medina around. That’s a testament to how well this story is being written. And it’s so lean, too. I continue to be impressed with just how many panels this series has where there are no words at all: no dialogue, no captions, no sound effects; just characters visually telling a story. There is a three-panel sequence in the middle of this issue where we just see Medina washing her hands. It’s wonderful because, of course, she’s not just washing her hands; she’s deep in thought, and allowing that to play out in silence builds real tension in the moment.

Aaron Campbell’s artwork, along with José Villarrubia’s coloring, is not only impeccable, but it’s clearly very important when so many panels rely on it to convey emotion and story. You see how heartbroken Medina is, you see how tired Tom is, you are immediately put at ease by how Kent looks when we find out he’s a nice guy. And it’s so jarring to go from quite realistic images of these humans and their emotions immediately to these entities with their disfigured visages and inhuman forms. This is truly a horror comic. 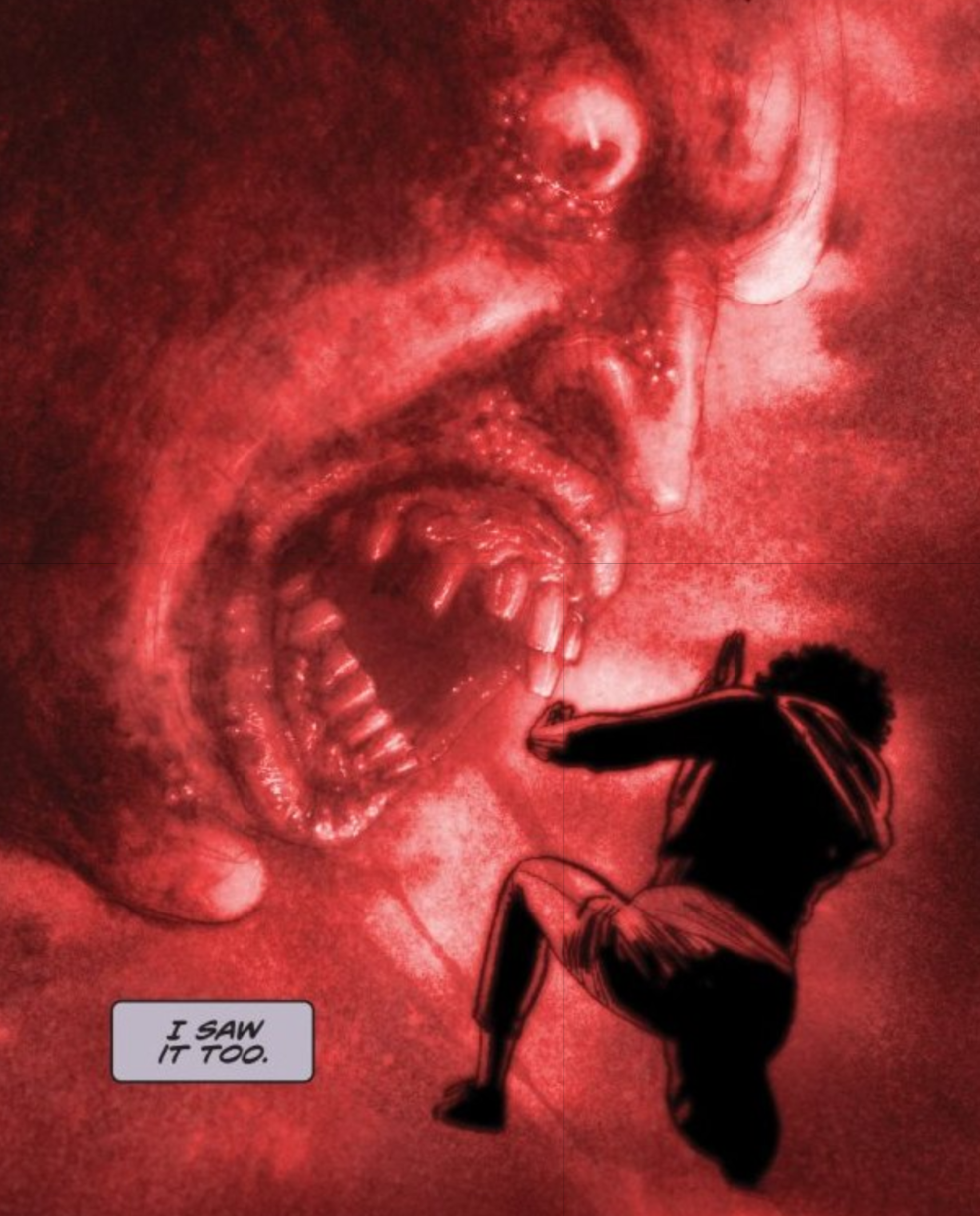 Lastly, I’m a reader who loves back matter. This limited series has done well to bring quality to its back matter and make it worth it for a reader to read month-to-month instead of waiting for a trade. Here is no different. First, as we have in every issue, we get an editorial from writer Pornsak Pichetshote. Sadly, this is his final editorial of the series, but it’s for a good reason: the final issue will have more pages of story. Beyond that, we get a lovely interview of artist Aaron Campbell, conducted by colorist/editor José Villarrubia.

So now we wait for next month’s final issue. Until then, if you see something strange in your neighborhood; you know, if there’s something weird and it don’t look good, you should most likely just chill out because it’s probably not that weird, and you’re gonna get someone hurt. I mean, what are you going to do? Call someone? Who you gonna call? Maybe don’t.