Previously on The Handmaid’s Tale, “Heroic” 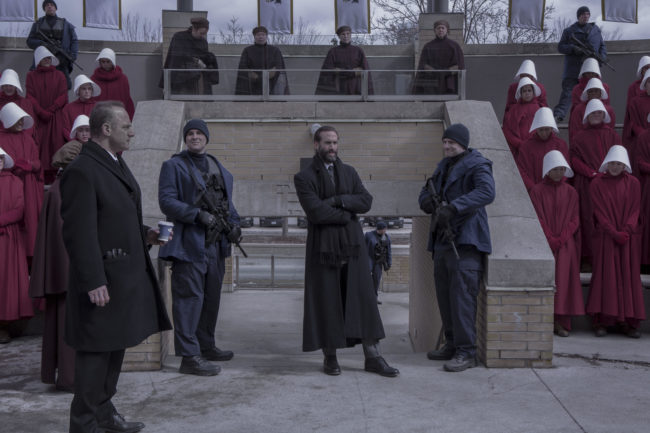 Life has changed at the Lawrence’s while June was away. She returned to a newly furnished home, an un-medicated Mrs. Lawrence, a Commander who has developed a renewed interest in his work, and Boston is working overtime to keep up with the Winslow’s Washington DC. June has also changed during her time away; she appears to be more repentant and possibly obedient. It’s like walking into the other-other Twilight Zone.

June attempts to return to her normal when she is smacked in the face with the knowledge that she was released just in time for the bedding ceremony. Unbeknownst to the Lawrences and June, the other commanders are insisting upon an observed bedding. This is something that was in place in the early days of Gilead, levied against those who were resistant of Gilead’s new practices. Commander Winslow, The Waterfords, and Aunt Lydia are present as well as a doctor to confirm the seed was planted. In order to preserve her own life, June has to comfort Mrs. Lawrence and convince and coddle Joseph into their mutual sexual assault. There are a lot of sickening moments in this show, but having to convince your captors to have sex with you in order to preserve your own life is another. At least the show did the audience the service by not showing the bedding; for that I am thankful, but witnessing the after effects is more than enough.

The guilt Commander Lawrence has for helping build and maintain Gilead has pushed him to the brink and he is willing to listen to June, who recommends he get Mrs. Lawrence out of Gilead. June doesn’t make this suggestion without her own interests — agreeing to help his wife also means there is something in it for her. She wants his help getting the children of handmaids out of Gilead. The time away seems to have given June some clarity and finally working with other established networks vs against herself and others. She finally has a plan and the support of a powerful commander and all of the local Marthas which may lead to success. It will definitely lead to some deaths. Who is willing to die for the freedom of these children? How long will it take the Commanders to catch on? Who is going to betray the resistance?

Last week was a bottle episode; this week showed some much-needed forward momentum in the heavily foreshadowed June’s Underground Railroad. We get some insight on how the Martha network communicates and how powerful Commander Winslow truly is. But now what? The remaining 3 episodes need to address some key plot points: Baby Nichole, Emily, June’s 11, Gilead’s New Groove, and Whatever Happened to the Lawrences. I have had no faith that June would get anyone out of Gilead let alone with a semi-truck full of children, but this episode gave me the tiniest of hope she at least has the support to try.

For the past season and a half Jasmin and I have tirelessly held the show and showrunner’s feet to the fire in regard to their choices in storytelling. Some writer rooms are stronger when they aren’t hamstrung by source material, but that isn’t the case here. The story being told has become more convoluted and twisted at every turn. At times it’s as if they have a torture wheel they spin each episode and that is how they decide what will occur. Even the most well-acted show can’t sustain the challenges of poor writing and slow to no forward momentum.