Traditionally the entrance of New York Comic Con welcomes attendees with a large booth/interactive experience. This year it was Starz’s turn to show up and show out, and they did just that with American Gods and Outlander booths. Each was a recreation of prominent locations in their coming seasons.

The American Gods booth transported you to the Motel America Diner, which featured a counter with a cash register, menu board, and dessert display with (questionably edible) desserts; diner-style booths and tables; photo ops; a jukebox with classic tune; and décor loaded with “Easter” eggs for season 2. If you pledged yourself to the gods you were rewarded with a NYCC 2018 Motel America Diner t-shirt and the pin or your deity of choice. 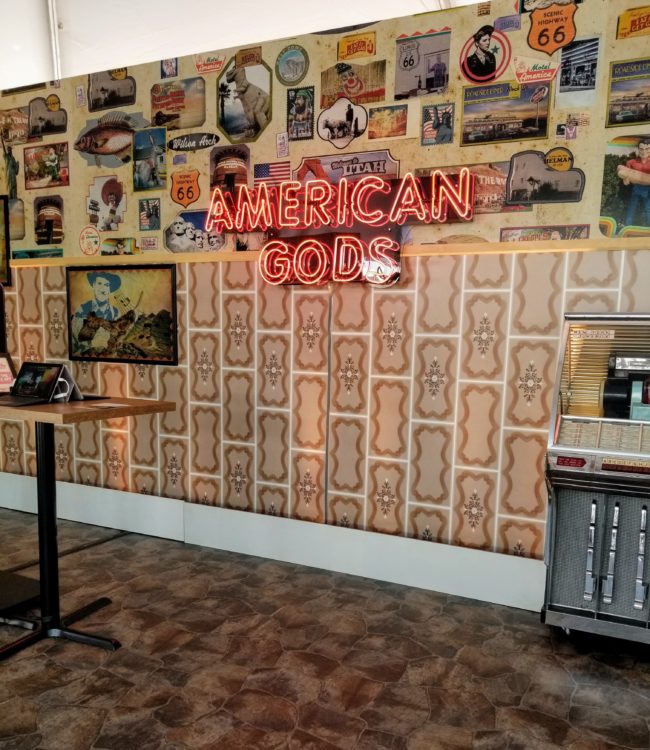 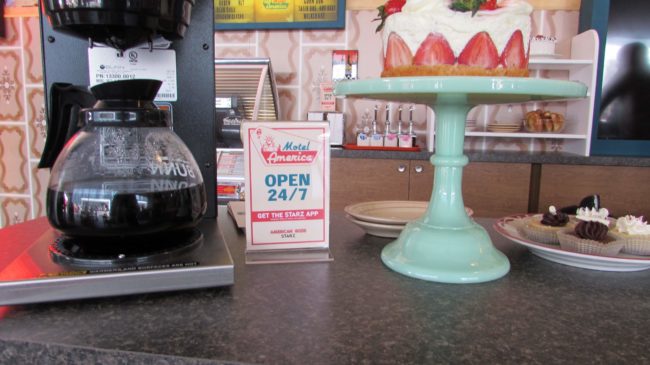 In another time, the Outlander booth welcomed you to the workshop on Frasier’s Ridge. An apothecary and leather workers were onsite as visitors received fragrances from Caswell and Massey, America’s first perfumery. The scents were those regularly worn during the time period: Rose Water; Sandalwood derived from Australian sandalwood trees; and Number Six the fragrance worn by George Washington at his inauguration. You also received a luggage tag you could get embossed with your initials and as the weekend wore on I saw some copies of books by Diana Gabaldon being given out as well. Both were a fun trip to your favorite show and time and they were perfectly executed. 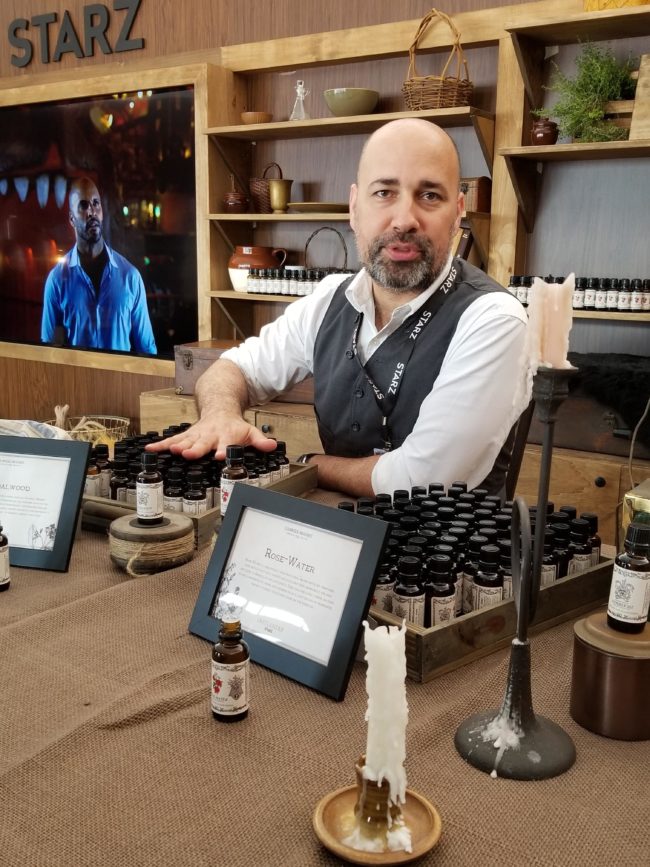 The full cast of the second season of American Gods was present and accounted for at New York Comic Con; they even let Neil Gaiman tag along.

What did we learn about season 2? Not much.

It was a panel of beautiful and engaging people who riff off of one another for an hour to keep the show at the front of your mind and possibly clear up a couple misconceptions about what is going on behind the scenes. Season 2 has a had a bit of controversy as it has been fraught with re-writes, re-shoots, and a change in show-runners. Ricky Whittle assured the NYCC crowd that the show and the show’s direction is in good hands with Chris Byrne, who has helped maintain the look and feel of season 1. The cast and Neil Gaiman seem optimistic.

American Gods isn’t expected to return until 2019 but we have a new trailer that is stunning with rich saturated colors looks and feels very much like the first season. It even offers a sneak peek at a couple new characters and locations including the highly anticipated carousel.

The Outlander panel was scheduled for an hour and a half, which usually means the crowd is going to see significant footage from the show or movie. Diana Galbadon strutted on stage, thanked the crowd for our applause, and we proceeded to spend the next hour watching Jamie and Claire Fraser-it-up all over the place.

The conclusion of the episode was met with raucous applause that grew into a mild frenzy when Ronald D. Moore (executive producer), Maril Davis (executive producer), Diana Gabaldon (author), Caitriona Balfe (Claire Randall Fraser), Sam Heughan (Jamie Fraser), Sophie Skelton (Brianna Randall) and Richard Rankin (Roger Wakefield) to the stage. The cast and creators chatted a bit about the usual challenges faced by the Frasers, but didn’t reveal much about the upcoming season. Fans were delighted to see them none the less.

The fourth season takes them to the Carolinas when the United States was in its infancy. The panel revealed they did not shoot in the United States. A new season also comes with a new musical intro with season-related imagery. This may be my least favorite version of the intro. I wish they would have committed more to the southern influence. The images in the new intro include some Indigenous people and I am concerned. This show is historically white by default and I am not entirely confident they know how to respectfully introduce people of color. Fingers crossed my apprehensions are unwarranted.

ProFan Robyn will continue her coverage of the show upon its return on to Starz on November 4, 2018. In the meantime, check out the new intro.