Previously on The Handmaid’s Tale, “Unfit” 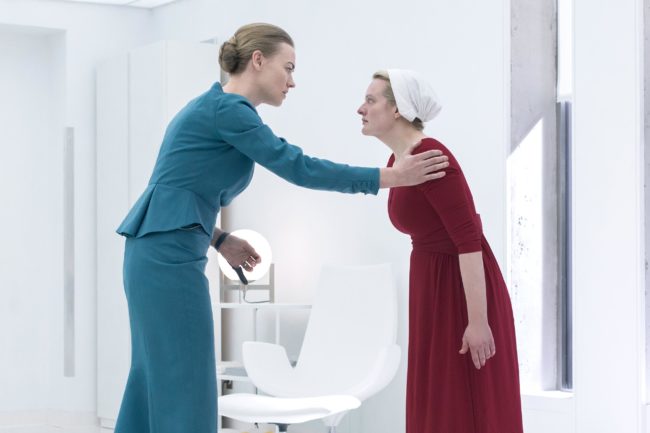 After eight utterly fatiguing episodes of The Handmaid’s Tale, I couldn’t help going into “Heroic” with my hackles up. I was ready to be frustrated and disappointed yet again, and, for the most part, my expectations were met. Had an episode like this come earlier in the series, it would have been quite haunting. As it stands, a large majority of it centered on the performance of Elizabeth Moss, and while she’s still an actress capable of great work, June has become a character I could use an extended break from.

It didn’t help that her voiceover, which has been used sparingly and to better effect as of late, was essentially back in full swing here. June’s description of the smells she’d been experiencing during her stay with Natalie at the hospital felt like merely a way of filling time. I could have done without her renditions of “Heaven is a Place on Earth” altogether – Black Mirror’s “San Junipero” put the song to far better use, thank you very much. And I definitely would have preferred for the show to resist the borderline garish indulgence of having Moss’ narration come to life as she directly addressed the camera.

I’m willing to let nearly all of this slide, if the larger goal here was all in the name of putting us deeper into June’s POV.  The quick cuts from day to night as June would fall asleep in place on her prayer pillow, and the vague timeline in general certainly help to prop that theory up. We know June has been at the foot of Natalie’s bed for 32 days when the episode starts but that’s the only real clarity we get. It’s hard to say how long Natalie was pregnant before she was shot, which makes it more difficult to presume how far along she was when her very premature baby was born.

The effect of this ambiguity was disorienting, to be sure. The thing is, given the poor storytelling from the entirety of the season thus far, it’s hard to tell if this was completely purposeful or just lazy writing. There is a turning point in the episode, however, where a noticeable shift takes place and the season finally seems to take a step in the right direction.

June has clearly lost it when she sticks her hand in that hazardous waste basket to retrieve a scalpel. The fact that Janine was the one to talk some sense into her was both surprising and welcomed. Even better was when she gave June a reality check, in asking her how she got to be so selfish. Yeah, June, when did it become all about you? How refreshing to see June put in her place by someone who holds the same level of power as her. Unfortunately, it’s not enough to shake June awake. Doubly unfortunate, is that the real wake up call was ultimately triggered by a man.

I suppose it could be argued that Natalie’s doctor is a lesser Evil of Gilead. It doesn’t seem as though he’ll be reporting June for trying to stab Serena – the attempt at which was both pathetic because of June’s weakened condition and rather exciting because, well, Serena sucks. However, the doctor, like most men in Gilead still had a foreboding energy. It’s maybe not quite the right word for it, but the way he pointed out to June that her homicidal thoughts were actually suicidal felt a lot like mansplaining. And you could smell the bullshit coming from his, “this is how I honor the Handmaid” nonsense. Still, the doc’s question of how June would honor her daughters is what manages to get the gears shifting in her mind. With that, June has a new purpose to devote herself to. She’s seen the light, but not in the way Aunt Lydia would like to believe.

June is going to save the children of Gilead – at least that’s her plan – and I can’t deny liking this look on her. Defending those who have even less of a voice than her feels like a worthy cause to take risks for. Could we blame her for wanting to get Hannah and Nichole out more than anyone else? Nope. But this shift in focus feels necessary for both the character and the show. It offers a much better reason to prolong our stay in Gilead, and, most importantly, something hopeful to hold on to. Though it doesn’t excuse the unfortunate loss of Natalie, June’s apology to her walking buddy did offer something lighter in nature, dare I say touching, because it’s the least pretentious June has been in ages.

“Heroic” was without a doubt an improvement over last week’s “Unfit.” The final four episodes of this season certainly have their work cut out for them if this ship wants to stay afloat, though. One slightly-better-than-decent episode doesn’t fix the problem of eight duds, either. So, only time will tell if this was all just too little too late.

An avid reader of TV Guide in her youth, Jasmin has been a fan of all things television since she can remember. She’s very passionate about story, especially the kinds that use cameras and actors to convey them. When she doesn’t have her eyes glued to the tube, you can find her listening to podcasts or reading reviews about, well, TV. Yeah, Jasmin might have a slight addiction but she’s perfectly happy to coexist with it.
Contact: Facebook