Victoria/V.E. Schwab is currently on a multi-city tour for her new novel Vengeful, the follow-up to her best-selling and previous Project Fandom book club selection Vicious. She took a two-day pit-stop at New York Comic Con and I was able steal a few moments with her to discuss her tour, attending cons, and her newest venture into comic books. After playing a brief game of Victoria, Kituria, Victoria, Kituria, during our intros we chatted about our mutual feelings towards NYCC and concluded as much as we were looking forward to going to our favorite Geek Family Reunion, about 24 hours in you realize there may not be enough booze to get you through the days to come. Although she was exhausted from touring, her enthusiasm for Vengeful and Steel Prince are palpable and she can’t wait for people to experience both.

I asked her how Shades of Magic: The Steel Prince, the comic book series based off her Shades of Magic novels, came about. She was approached by Titan Publishing about doing a comic and she said yes to the opportunity to tell Maxim’s story, which takes place 30 years before A Darker Shade of Magic, the first novel in the series. Her hope is to capture a new audience as well as engaging current fans. She acknowledges that some of her readers may not pick up the individual copies, but are more likely to pick up the trade paperback and hopes the new readers will enjoy the series as an introduction to her work. NYCC was the first time she’d gotten to see the printed copies of the first issues and it was like truly crossing the finish line for the project.

She showed me several of her favorite elements of the comic: Maxim come to life, the visualization of magic and how it is actively happening on the page and not just a puff of smoke, and her favorite character who appears on the last page of issue #1. This character is a badass pirate who practices bone magic and Schwab felt like her personality most closely matched her own. On the topic of visuals, I asked if she was able to sneak in a character that specifically looked like her. There was a record scratch at the table. She hadn’t considered it and neither had her handlers. She said was going to try to work it into the next series even if that meant possibly incorporating some of her friends into the comic. I plan on personally taking credit for this if it happens. 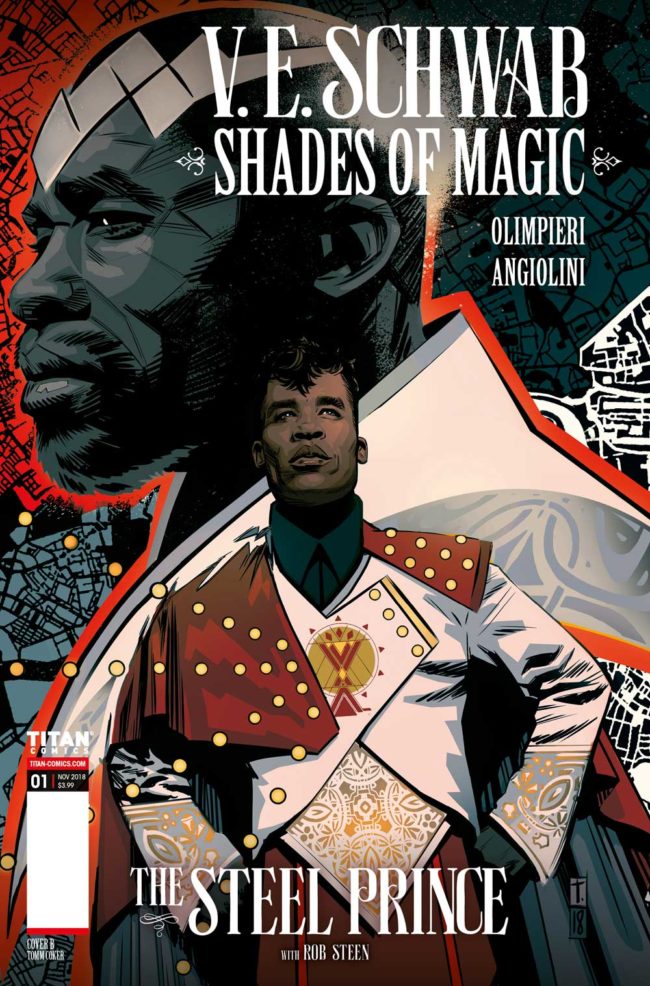 She also explained that Maxim is unequivocally a black character. Over the years of creating characters with ambiguous racial identities, she thought it was a great thing many readers of various races could see themselves in those characters. She has learned, though, that by not being firm on the race of a character it is another form of erasure and has been working to rectify that in her novels and the comic.

I’m currently reading the first Shades of Magic book, A Darker Shade of Magic, through Audible, and I asked Victoria how the increase of accessibility to audiobooks has influenced her writing. As a reader of books both traditionally and through audiobooks, she knows how the cadence of a book, as well as the narrator, impacts the listener. Her literary training focused on poetry so she reads her books aloud to get a feel for how it would sound being read by someone. She also noted she had less control over who narrated her books in the beginning of her career and some narrators provided a better feel than others. In recent years, the recordings have moved in-house and a husband-wife duo narrated the second book of the Shades of Magic series and while the original narrator was excellent, having the husband-wife team created a more symbiotic feel to the material.

I was able to get my hands on an advance copy of the comic and it does not disappoint. I won’t go into spoiler territory as Project Fandom will be reviewing the series, but the visuals paired with the story make this a must-have companion to the Shades of Magic series.

Shades of Magic: The Steel Prince issue #1 released on October 10, 2018 and can be found at your local comic shop and online. Victoria /V.E. Schwab is still touring through the end of October; maybe you can catch her in your city.

4 Comments on From Novels to Comics: A Chat with V.E. Schwab